The Amsterdam Cineac movie theatre was located
directly opposite the famed Tuschinski Theatre on
the narrow Reguliersbreestraat. It symbolized modern
rationality versus old-fashioned romanticism.
It opened on 18th October 1934 and the architect
Jan Duiker managed to create on an awkward
site an ingenious auditorium in which the
projection room was tucked away, under the balcony.
To open up the mystique of the operation of the
cinema, the operations within the projection room
(located over the front entrance) could be seen from
the street as it had glass walls on two sides. 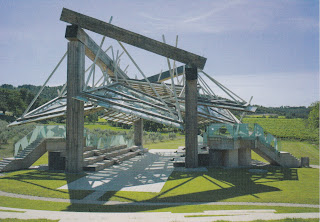