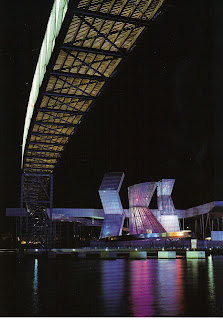 According to the architects of this project,
"The site of the great exhibition has been
conceived as a roofed platform jutting out
over the lake, ending in a space with three
towers. Its resemblance to an aircraft
carrier is not a matter of coincidence but
fully intended." The "island"of this futuristic
carrier-like structure is formed by those
three twisted towers featured in the picture.