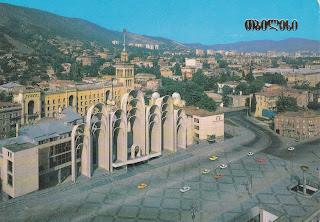 The monumental concrete arches nicknamed "Andropov's Ears"
were built to honor an oficial visit of Yuri Andropov, the general
secretary of the Communist Party of the Soviet Union and former
chairman of the KGB.
The monument was demolished in 2005 after Georgia's
independence from the Soviet Union occurred in 1991.