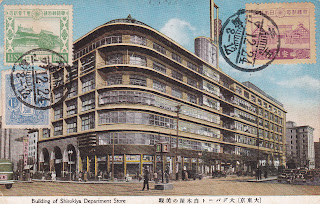 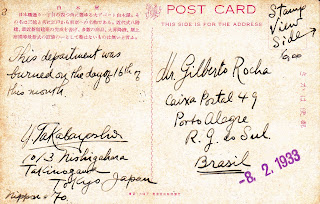 Pioneer architect Kikuji Ishimoto studied in the 1920s at the
first Bauhaus School based in Weimar. Back in Japan he
became soon one of the leading modernist architects in the
country. This beautiful vintage postcard shows his eight-story
Shirokiya Department Store Building built in the modern style
as early as 1928. Regrettably the building burned down just
a few years after completion in December 16, 1932. The
original message of this postcard, mailed in February of 1933,
mentions the tragic event in which 14 people died and several
got injured.