497. Design for the Amsterdam City Hall 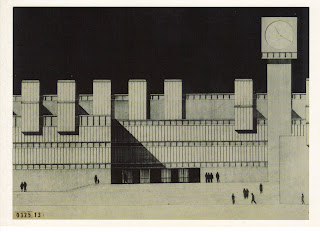 An international competition for the design of the new
Amsterdam City Hall was held in 1967. 803 entries
were received. Seven of the final twenty designs were
then selected and their designers asked to further
elaborate their schemes. Rafael Moneo was among
these seven finalists. He stated about his project: "The
filtering of light from the roof is the main theme of the
internal space, thus the reception-rooms have been
conceived as real light-wells"

Holzbauer won the competition, but the project was
first postponed and eventually replaced by the Stopera
Complex.

Regards.
R
at March 13, 2011
Email ThisBlogThis!Share to TwitterShare to FacebookShare to Pinterest
Labels: a: Rafael Moneo, c: The Netherlands, y: 1967